3 Tactics To Increase VR Technology Adoption At Your Architecture Firm

PART II: HOW TO IMPLEMENT VR TECHNOLOGY WITHIN YOUR FIRM

Earlier this month, we hosted a webinar with Justin Benjamin of Perkins + Will to find out how they’re operationalizing VR and increasing design efficiency. This is the second post in a two-part series that will recap and share insights on use cases for VR and implementing it within an Architecture firm.

Over the last few years, architecture firms have started to invest in virtual reality (VR) technology and software to help their designers better communicate design intent and empower their clients to make faster and better design decisions. Even though the value is clear to executives, it can be challenging to ensure company wide adoption.

Has your design firm invested in VR technology? Are you looking for strategies to educate the staff and increase usage? Check out the three tactics Justin Benjamin, Design Technologist at Perkins+Will, used to increase VR software adoption across his office.

1. Make VR headsets and software visible to everyone

When getting started with VR, many companies set up a private VR room for their meetings and review sessions. While this can be great for more intimate discussions between architect and client, it can also be pretty isolating and does a major disservice to attempts at widespread adoption.

Try setting up an open VR station in your office so that people within your office see and hear how the tool is being used. It makes the technology more approachable and can spark curiosity within your team - seeing others use VR will help encourage people to check it out for themselves. Perkins + Will does just that; their VR stations are called CAVES (Collaborative Areas for Virtual Exploration). The name alone puts collaboration front and center, and their high visibility makes others want to try VR. 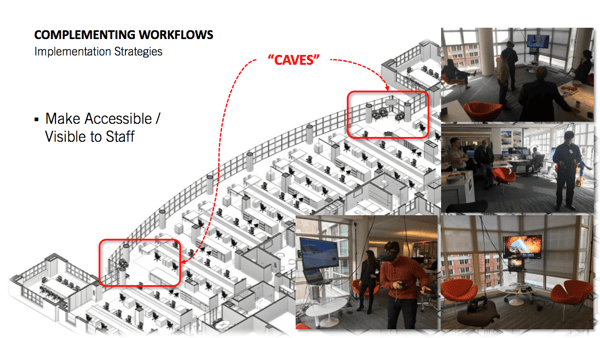 2. Incentivize your team to try VR

As VR becomes more and more common, people across architecture, engineering, and construction understand the value it can bring to the design review process. However, they’re often hesitant to get started with it because they expect they’ll have to learn a new skill set to use the technology (like making the transition to BIM). By incentivizing your team to get acquainted with virtual reality, you can show them how easy and intuitive the virtual world really is.

At Perkins+Will, Justin set up a VR Happy Hour to help incentivize coworkers to give it a try. He had the architects launch one of their models, use the annotation tool to write their name, and then use the screenshot tool to take a picture. The next day, Justin downloaded these screenshots and awarded a $10 Starbucks gift card to anyone who participated. This simple yet effective setup allowed team members to give VR a try, see how easy it was to launch and navigate, and experience a few of the tools without getting overwhelmed.

If you’re looking for a more in-depth tutorial, Justin recommends using the Lunch and Learn format. He planned one with a scavenger hunt, where groups of designers had to complete 3 objectives depending on the model - anything from taking a picture of a particular view, making a certain type of annotation, etc. Whoever completed the challenge first received a prize. This type of initiative is good for encouraging more in-depth use of VR tools and their features. 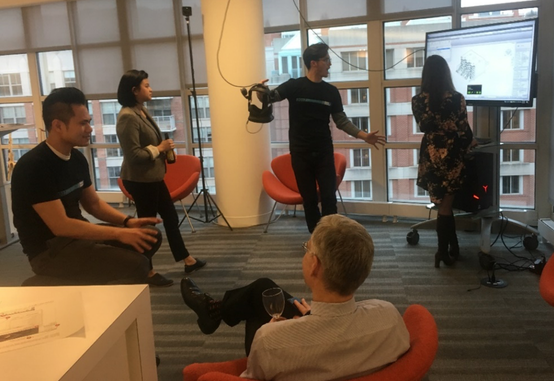 Sometimes, people are wary of using VR for fear of being uncomfortable in the virtual world because they’ve heard that VR can cause nausea. It’s often helpful to explain why motion sickness happens in VR (low frame rates) and to highlight that Prospect runs at 90 FPS, so it’s unlikely to cause any sickness. You can also help to explain what they can expect in a VR landscape before getting started, so that they have some familiarity with what things will look and feel like. If they’re still hesitant, it can be helpful to put on the headset yourself - sometimes people just need to see someone else to do it first.

These strategies for implementing VR at your Architecture firm can help you get your colleagues to actually use these tools in their daily design process. Though it may take time to get everyone on board, it will be well worth it in the end.

Want to watch the webinar and see the full presentation? Sign up here to get the full recording.